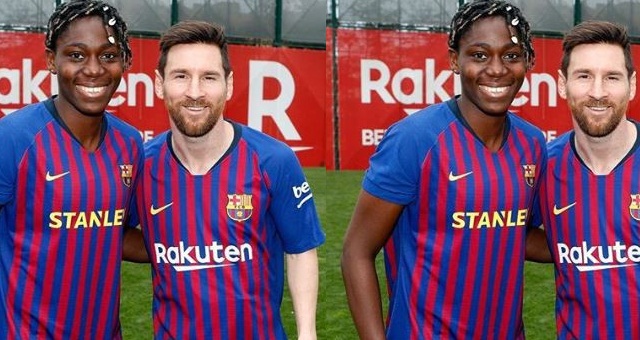 In today’s publication, we like to recognize the Ikorodu born, now international footballer. At Hugies Pharmacy Ikorodu, we believe in our community and the people therein. Learn more about the Ikorodu-born star;

In 2019, the Super Falcons captain was emotional when she went down memory lane while speaking about her journey from the slums of Ikorodu, to a third-rate football pitch in Mushin and now at Barcelona.

In the documentary above , Asisat spoke about growing up in an environment where girls were not expected to be involved in sports. Without her parents’ support, the forward says she had to hide to play football with her friends after school.

It was only her grandmother who is late now that supported her passion for football, often covering for her anytime she went out to play football. Speaking about her grandmother got Oshoala emotional in the documentary as she struggled to hold back the tears.

She also spoke on how she got her first club by chance after she was first discovered while playing in a tournament for an unnamed team. FC Robo, a female club took a chance on her and that was when her story changed. She went on to play for Rivers Angels in Nigeria before she got her big break by signing for Liverpool Ladies…then it goes on.

She finally got her parent’s approval when she won the Golden Ball and Golden Boot of the 2014 FIFA U20’s Women’s World Cup. Since then, Oshoala has won the BBC Women’s Footballer of the Year (2015) and has four African Women’s Player of the Year awards to her name.

Recently, the Four-time African Women’s Footballer of the Year starred as a second-half substitute as Barcelona Femenino blew Chelsea away 4-0 to win their first Women’s Champions League title in the Swedish city of Gothenburg.

Today, Asisat Oshoala becomes the first Nigerian and African woman to win Champions League. She is indeed an epitome of success; who never allowed her background to hold her back on the ground by going against all odds in spite of being raised in the slum. Source