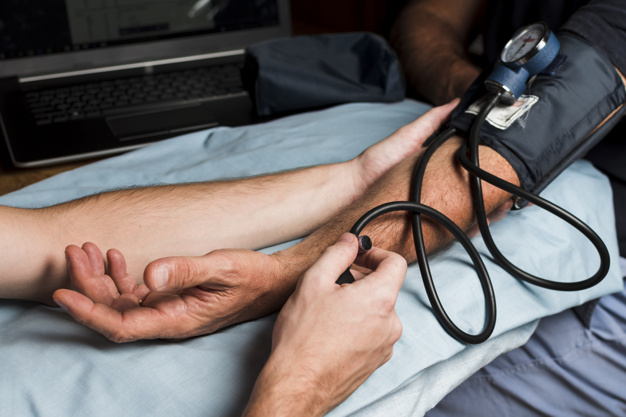 This is a report on a Swiss research on Blood Pressure spike (hypertension) after covid-19 vaccine.

A very small proportion of people developed stage III hypertension within minutes after getting an mRNA-based COVID-19 vaccine, reports a case series study from Switzerland.

Among the 12,349 people getting a first dose of vaccination at a hospital in Lausanne, Switzerland, nine participants (median age 73 years, seven were female) experienced stage III hypertension within minutes of vaccination.

Eight out of the nine patients reported having history of arterial hypertension, with six patients being on anti-hypertensive therapies. Although baseline blood pressure (BP) readings before vaccination were not available, eight of the nine individuals reported otherwise well controlled hypertension. Importantly, all patients eventually recovered after several hours of monitoring.

“Our case series suggests that a fraction of hypertensive patients may react with symptomatically significant increases in both systolic and diastolic BP,” said the researchers.

In the vaccination centre, BP were measured using an oscillometric manometer, with at least three sets of readings taken at 5-minute intervals. Among the nine patients showing symptomatic hypertension, BP rose as high as 220/102 mm Hg in one case. Other symptoms reported included headache, malaise, chest pain, anxiety, and sweating.

“The mRNA vaccines have received intense scrutiny for immediate hypersensitivity reactions in the wake of an initial report signalling cases anaphylaxis. Hypertension, on the other hand, has not been mentioned explicitly as an adverse event in both safety/immunogenicity trials,” noted the researchers.

They also pointed out that the nine patients who developed hypertension after vaccination were elderly, unlike the participants in clinical trials for mRNA-based COVID-19 vaccines which involved predominantly younger populations.

“Our data indicate that in elderly patients with a history of hypertension and/or significant prior cardiovascular comorbidities, pre-vaccination control of BP and post-vaccination monitoring, including symptom screening may be warranted,” said the researchers.

Nonetheless, experts believed that there is no cause for concern yet, based on the current data. While achieving good BP control is important, delaying vaccination in these patients may place undue risk of adverse outcomes from COVID-19.

“A stress response is likely in view of the public debate, in addition to pain response and white coat effect, the latter being associated with age and female sex,” suggested the researchers on potential mechanisms underlying the hypertension seen after vaccination. “However, the relatively low heart rate (median 73 beats per minute) may soften this hypothesis.”

“Alternative mechanisms could theoretically include hypertension to components of the vaccines such as polyethylenglycol, although this seems unlikely due to the presumably low dosage and as patients reacted within minutes of the injection,” they added.

The researchers urged for more data to better elucidate the extent and possible mechanism of hypertension after vaccination.